“LIFE is an adventure….Just explore it…!!!” True words…. Trekking is one such adventure to know about nature. In dictionary words, A trek is a long, adventurous journey undertaken on foot in areas where common means of transport are generally not available.

The highest monolith in Asia, Savandurga comprises of two hills, Karigudda (Black Hill) and Biligudda (White Hill).It is located approximately 33 km away from Bangalore, deviating off Magadi road. Savana Durga that rises to a height of 4050ft above the sea, can be a challenge as you climb up the smooth monolith. In History Savandurga was named as ‘Savina Durga’ which means ‘the fort of death’. At the time of Hyder Ali, this hill used to be as a fort prison, from which it was said there was no escape.This place is also a pilgrimage center as it is the location of two temples in the foothills – the Veerbhadraswamy Temple and the Lakshmi Narasimha Swamy Temple. At the top of Biligudda, you can find a small shrine to Nandi bull. The Manchanabele Reservoir, created by the waters of the Akravathy River, is a lovely place from which you can get an enticing view of the Savanadurga Hill. Savanadurga is surrounded by a thick forest of scrubs and dry deciduous vegetation.

Skandagiri is a hill with the ruins of a fort which dates back to the 18th century.a beautiful hill, It is situated approximately 70 kms  away from Bangalore city, off the Bellary Road (NH-7 Hyderabad-Bangalore Highway), 3 kms away from the village,Chikkaballapura.The peak with an altitude of about 1400 meters, is a  paradise for adventure freaks, and ideal for night treks, camping, and bird watching. 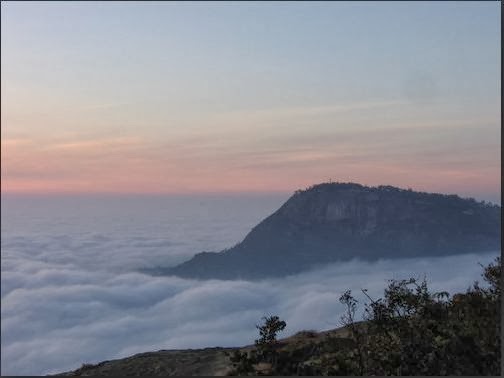 Skandagiri Peak has a ruined fort and the ruins of a temple with Nandi Bull statues. According that this small hill fort was surrendered to the British troops on 19 October 1791 and remained in The British hands until the peace treaty of 1792, which concluded the third Anglo-Mysore war. As per the local people, there are two caves through the hill  - one starts from the base and another one  somewhere midway, about 30 feet below , both leading to the temple at the top. Both remains unexplored yet and local people claim pythons in the caves swallowing their pets. It is said that there are 6 Samadhis in the cave. 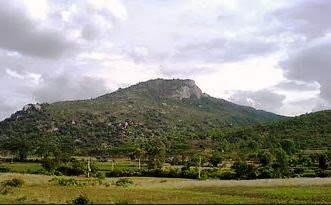 Ranganatha Swamy Hill doesn’t have any ancient significance. According to the local villagers, it is named after a stone that emerged from ground atop of mountain, later named as God Ranganatha Swamy. Ranganatha Swamy Temple is one of the oldest temples found in nearby villages. The temple is open only on Saturdays and there will be a special ritual offered to god on that day. 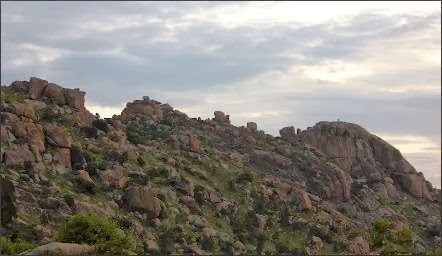 Anthargange is a destination that will surely please the adventurous. The name Anthargange actually refers to a perennial spring which lies on the hills to the east of the Kolar district in Karnataka.is 70 kms from Bangalore. The main tourist attractions include the volcanic rock formations and its numerous cave systems.

Ramdevara Betta & Revana Siddesh Betta is one of the famous trekking and pilgrim spot in Karnataka. The all time block buster Bollywood movie Sholay was shot here, and it houses the legends of Gabbar. Ramadevara Betta is a hill station is about 3066 feet above sea level and has steps on the western side part place. The Sri Rama temple is located at the top beside a small pond. It is on the famous Mysore highway very close to Ramanagar town. 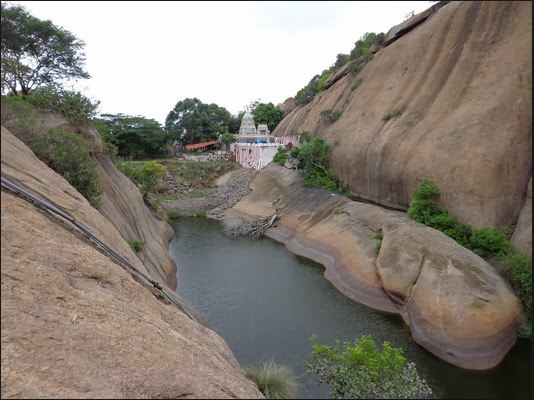 
Other than the mentioned ones there are few more trekking destination which can fulfill your thirst of adventure. Few of them are discussed here

Shivagange is a mountain peak and Hindu pilgrimage on the way to Tumkur 54 km away from Bangalore on NH 4. The hillock has few temples atop and a statue of Nandi carved out of single stone is a beauty. Shivagange invites not just pilgrims but rock climbers and adventure lovers as well.

Kunti Betta is a hillock near Pandavapura in Mandya District, approximately 130 km from Bangalore and 25 km from Mysore. Kuntibetta, known for its night treking is very rich historically too. "Pandavapura" means "Town of Panadavas". According to the history, the Pandavas are said to have ended their 14 year long here, hence the name ‘Pandavapura’.